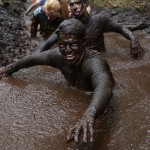 Well that’s it for another year. Time to hose down those spikes, grease the threads (stops them getting stuck you see) and put them away until we can do it all over again in about 8 months’ time.

And so it was that beside the River Aln our 2016/17 Cross Country season came to a great end in excellent conditions (the Met Office having got this one horribly wrong thankfully).

A really great turnout from the club saw the men going in to the race with the slimmest of chances of getting promoted although sadly the attempted road block of the A1 (to stop other teams getting to the race) was thwarted and they had to settle for third. Both the men and women must be in with a great chance of promotion next year however.

Special shout outs to Abby Dorani and Aaron Hoyle for both producing storming runs and therefore affording themselves the pleasure of the fast pack next season (Abby is currently using her legal training to see if she can extricate herself from this rule but it looks doubtful). It’s also going to be a promotion to the medium pack for David Stroud next year.

The cakes/sausage rolls/pizza were (as always) calorifically splendid and for those able to attend the evening social there were some additional awards to recognise the various efforts and achievements of club members throughout the season.

Final special mentions to Heidi Findlay for falling over and if anyone has the time to teach Chris Kenyon how to properly tie a shoelace it would be much appreciated.

If you’ve never done cross country hopefully the link to the video below gives you an idea of what you’re missing out on.