Two years down the line and finally we got to race. Here’s the view on the weekend from those taking part. 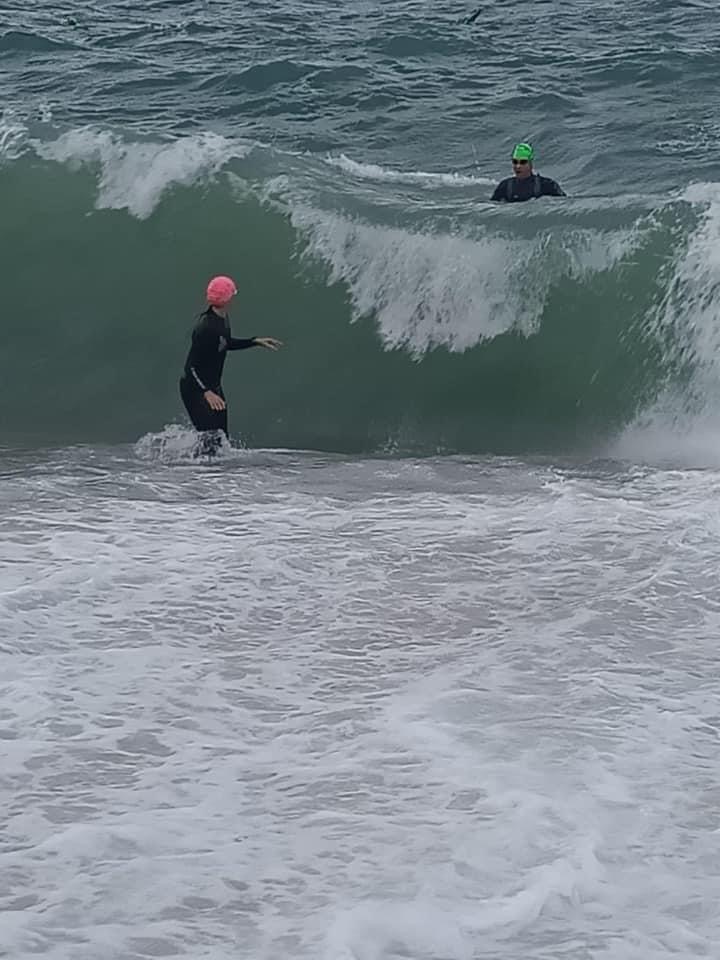 Friday – It’s off to register, wristband on and the realisation, this is it. It’s happening! A nice swim in the warm calm Med left us feeling good.

Saturday – the weather was cracking. A short bike ride and a little run along the shoreline to loosen the legs, we could see they’d set the buoys up for the next day. Later that afternoon however, taking the bikes down to rack up, we noticed the buoys had been brought back in. Hmmm, that’s odd.

Sunday – woken at 2am to the crack of thunder and howling wind. God! An early breakfast and off we went to the start. The good news; it had stopped raining. The bad news; the wind was blowing big time straight off the sea and the news came the start would be delayed and the swim had been shortened. While disappointing, one glimpse at the waves crashing in and it was understandable.

And the thoughts of each Pont Tri competitor:

Standing with my brother Roy and Dom waiting to start looking out to the sea feeling the nerves for what was about to happen. Well, that swim. The sea kept spitting me out. 3rd attempt I was off into those huge, terrifying waves. I made it out ok and onto the bike which was so tough in that head wind. 112 miles later and a lot of aches and strains it was time for the run which I’m not going to lie was a painful marathon. I smiled my way through it though shouting out to all my race mates and appreciating their words of encouragement in return. The support on the course was amazing. My friend Louise Patrick, David and Sarah Levison and Mark Carpenter you were an amazing support crew. Proud to be part of it with you all. We are Ironmen. 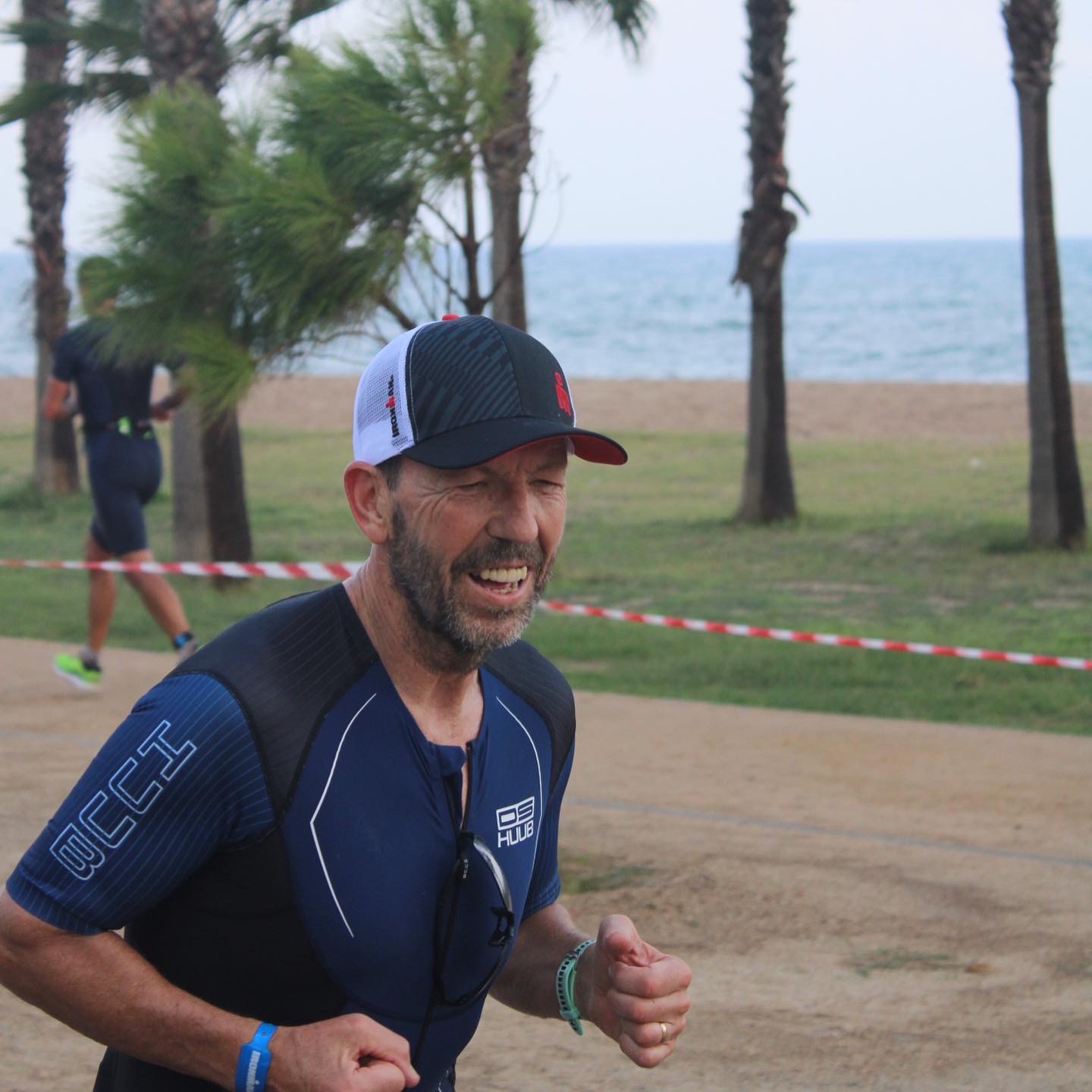 A group photo before the call came to line up for the start to the pounding sound of AC/DC’s Thunderstruck and Hall of Fame by The Script (up there with Local Hero in the spine-tingling lump in the throat tunes!). Standing with Elliott, we wished each other well and made the plunge. Battling through to the finish only to be thrown completely head over heels, dragged back in and spat out again into the flailing arms of a safety marshal. What a hoot!

Box one ticked and laughing to myself at what had just happened, it was onto the bike for a two-lap ride of 112 miles (no problem right?). Very quickly, you’re out of town and straight into a headwind, this was going to be challenging but just pray for no punctures and you’ll be fine. Top end of the course, time to turn and suddenly feeling like a cycling god with the wind on your back, blitzed it back to Calella. Cheers from David and Sarah were a huge lift and I set off for lap 2 with renewed energy and celebrated with my second jam sandwich! Six and a half hours later and I’m off the bike. Box two ticked and just a case of my first marathon to run!

My knees are not their usual jelly-like state after getting off the bike and I’m feeling good. Bonus! In a short space of time, you’re running between a mass of spectators on either side to the sound of ‘Go Mick’, ‘Vamos’, ‘Aneemal’ and ‘You got this’. Great to see the rest of the Pont team safe with Mark and Nikki Carpenter cheering away. A little further on, I was joined for a short stretch by David Levison reminding me to just stay calm, keep it easy and you’ll be fine. A wave from Sarah and before long I’ve done lap 1 but the buzz is fading. Lap 2 is purgatory and the final lap is a grind and I was suffering but I was able to make a reasonably strong finish before my right turn onto the carpet, lights flashing and loud cheering from the stands. I made it. I actually bloody made it!! No other feeling like it.

Standing on the beach with Mick Meaney at the start was awesome with Thunderstruck by AC/DC belting out over the tannoy. And then we were off!
I really enjoyed the challenge of the swim despite the conditions and once I got to the first buoy felt I made good progress.
The bike was a lot harder than I expected. The headwind took a lot out of me and whilst I was pleased with my bike time, I think I paid for that effort later.
On the run I started well but I knew I was in trouble after about 3km but after seeing Coach Levison on the course managed to get into a slow rhythm which got steadily slower. The finish was emotion and relief in equal measure.
A bit quicker than Copenhagen in 2019 but in much worse conditions.
It was a great day and an unforgettable experience to share with the fabulous folk from Ponteland Tri. 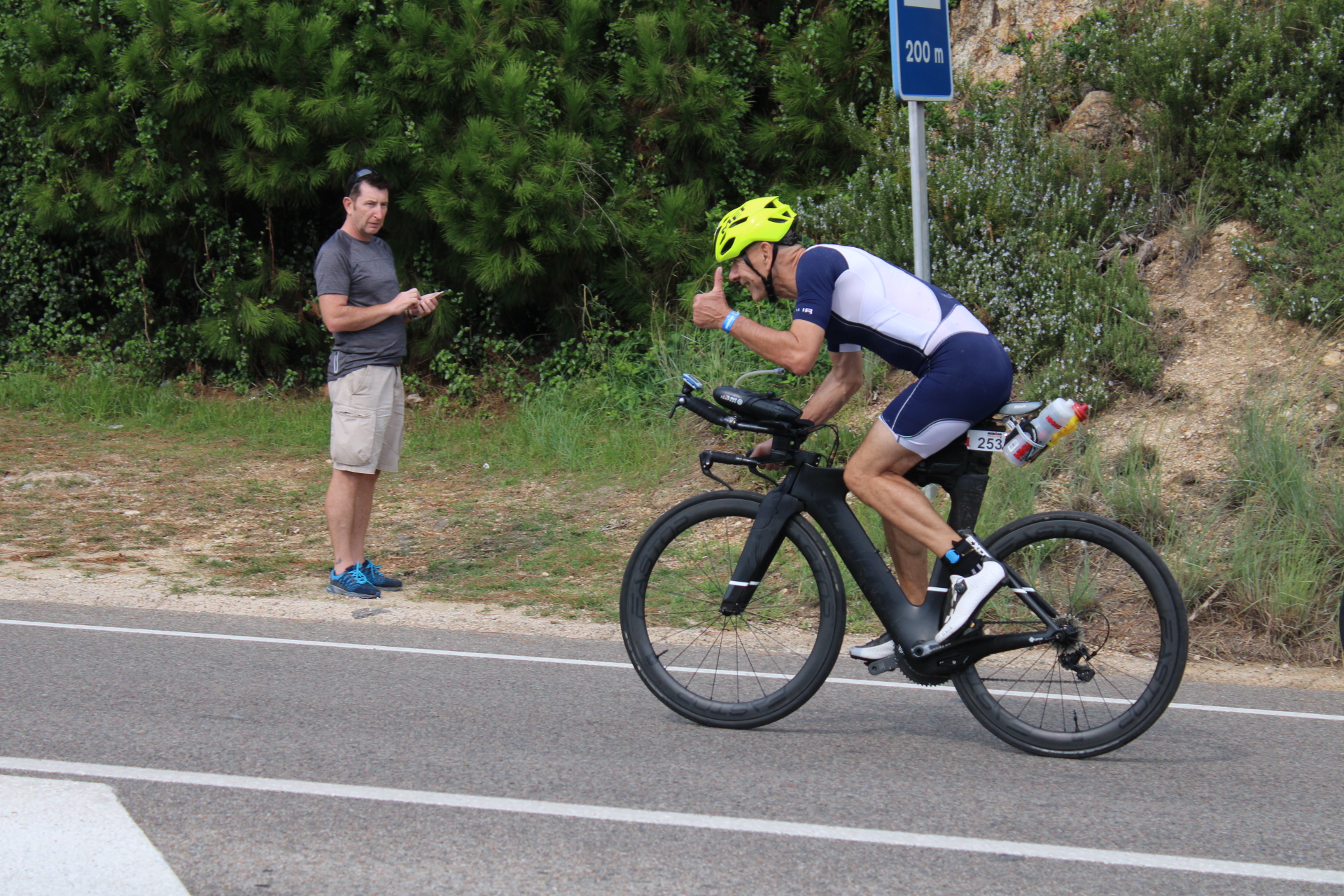 Mine was simply, started on 3rd October 18; finished 3rd October 21. Swim, bike run was the same as everyone else just slower. I ‘raced’ sensibly to make sure I finished. Finish funnel was the best bit of the whole journey. 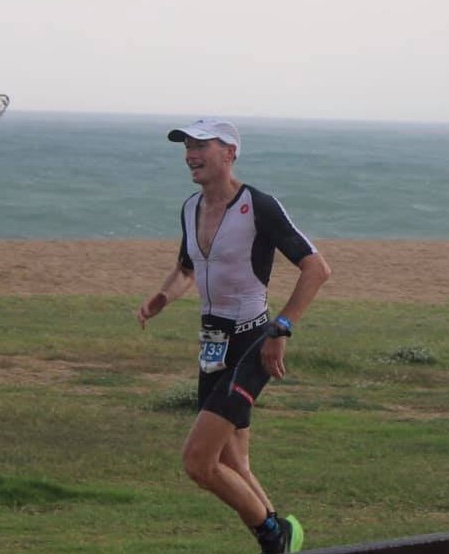 This was the second IM Barcelona for me so setting a pb and getting a decent age group placing was the aim.
We were greeted by a very windy race morning and pre-race nerves were running high, mainly due to my deep front wheel – David Levison to the rescue (again) with a quick wheel change a few minutes before the start – thanks David.
Ironman events are probably the best in the world and the build-up didn’t disappoint – the start was epic. Waiting for the 70.3 swimmers to finish listening to Gladiator and then setting off to Thunderstruck, you couldn’t help but sprint into the water totally pumped. That feeling didn’t last long as even though it was shortened it was the toughest 11-minute swim I think I’ve done – like a washing machine and then on full spin trying to get out – took 3 goes and my onesy was full of sand and stones for the rest of the day!
The bike was as expected, very busy with 2 races at the same time and everyone bunched up already with the short swim. The target was sub 5 hours and I was close at 5:02, the wind just making it that bit harder.
The run always feels hardest as it’s at the end and you’re pretty knackered by then, but lots and lots of sugar gets you through. The wind by now had been replaced by heat and then some rain but I was happy to finish in 3:22, so 8:47 total time, 81st overall and 7th in age group.
Big shout out to the rest of the Pont contingent – everyone survived a tough day with no spills. Thanks for the great on course support from David and Sarah Levison and Mark Carpenter.

What a great weekend and while we each may have had different goals; the important thing was we all made it to the finish safe and sound.

What an awesome experience and for anyone thinking of entering a full Ironman, don’t think too long. DO IT!! Just follow your training plan (DS Coaching can help you out there and apparently, they’re pretty good!) and you’ll arrive at the start line ready to go. Honestly!