It’s race 5 in the 6 race harrier series and for me Alnwick is the best course of the whole season. The photos show some of the beautiful surroundings we run through (great photo ops for spectators) and a new addition for the flat section through the tree lined boulevard of a fallen tree for us to jump over or run around depending how adventurous you feel! Both men and women have had full teams out so far and it would be great to see another good turnout this coming Saturday – so who is planning to run? Jon Parkin. 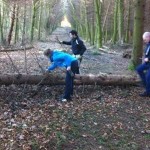 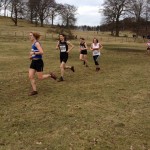 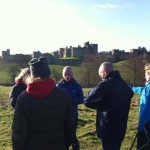 Well done to the 13 Ponteland Runners who took part today on a muddy but cracking course. The cake and coffee afterwards was much appreciated by all so thank you to everyone who contributed on that front! There are too many individual runners to name but the men again fielded a team and were led home by Jason Olds to finish 11th out of the 19 teams in division 3. The ladies continued their good start to the season by finishing 11th out of 30 teams in division 2, being led home by Joanne Brown running from the medium pack. It’s such fun doing XC, if only another race was coming up soon.

7 Ponteland Runners enjoyed an early season run out in fantastic sunny conditions at Tanfield near Sunniside this afternoon (28th September). Results for the ladies were as follows (184 runners):
Eva Lowther 7th 25 mins :25
Joanne Brown 19th 26 mins :48
Jo Shallcross 52nd 28 mins :56
All 3 women ran really well and will hopefully be the core of a very strong Ponteland women’s team this season. Well done to Eva for such a strong showing against some of the North East’s best runners. Joanne’s first cross country race went well and suggests it will be not long before she moves into the medium pack with Eva. Welcome to the club to Jo Shallcross and a great first run in our club colours.
The men’s results are as follows (324 runners):
Jason Old 106th 38:44
David Stroud 115th 39:03
Jon Parkin 252nd 45:44
Paul Holborow 263rd 46:25
It was a great performance from Jason and David in their first race and both finished really high up the field in a scratch race with no slow/medium/fast pack. Well done to Paul for his performance in his first cross country and as I tailed him for most of the race I can vouch for how well he climbs hills!!!
Hopefully the ladies who seemed to be taking pictures galore with their phones can post some pictures that will hopefully entice a few more of us to turn out on the 26th October for the first race of the league season at Blaydon.
Jon.

The change was agreed to run the women’s race before the men go off so the schedule is as follows:
Race 1 Under 11s (all fixtures apart from Wrekenton)
Race 2 U13 Girls
Race 3 U13 Boys
Race 4 U15 Girls
Race 5 U15 Boys
Race 6 U17 & 20 Women
Race 7 Senior & Veteran Women
Race 8 U17 Boys
Race 9 Senior & Veteran Men
This should not affect the men who wish to run too much except they now should arrive later than last year. Where this will be really good news is in encouraging more women to take part with their race being run immediately after the junior races have been completed and before the 400+ men have churned up the course.

The organising of when each race would take place is not 100% settled. Agreed details and dates are as follows:
28th September (or possibly 19th October) – Sherman Cup & Davison Shield, venue & hosts to be confirmed
26th October – Blaydon, Shibdon Pond
24th November – Jarrow, Bedewell Park (Sunday)
30th November – Morpeth, Wallington Hall
14th December – Temple Park, S Shields NE Championships
8th February – Saltwell, Wrekenton
1st March – Alnwick, Alnwick Gardens
22nd March – Tynedale, Prudhoe
Of the 8 races listed above 6 are in the harrier league (the other 2 being championships and therefore no slow/medium/fast packs!) and 5 are at the same venues as last year. The first race last year was held at Cramlington but car parking on wet ground caused too much damage and a new venue had to be found. Many of us have run road races based at Wallington Hall and now we get to try races of the off road variety on the 30th November. Anyone who is really keen can win themselves a free t-shirt this year coming (subject to sponsorship approval) if they complete both the championship races and at least 5 of the 6 harrier league meetings. Easy as that then… More news nearer the time (including pictures of our new tent hopefully!!!)
Cheers
Jon Parkin

Possible new training session. Would any members be interested in another weekly session? Joanne B has talked with good experience about how beneficial tempo running can be a part of a training programme. What are people’s thoughts? For anyone who is unsure what may be involved in tempo running I have copied this guide from Runners World’s website:
Tempo runs
Tempo runs help you improve your running economy and your running form. They are sometimes described as ‘threshold’ or ‘hard but controlled’ runs, and they will help you prepare for races of 10K to the marathon. Tempo sessions generally fall into one of two categories: steady runs of 2 to 6 miles; or long intervals with short recoveries. Here’s an example of the latter: 4 x 1 mile at tempo run pace with 2 minutes of recovery jogging between efforts. You should do tempo runs no more than once a week, and they should make up no more than 10 to 15 per cent of your total training.
Reply to this on the facebook page if you think it might be for you…

Well done to the 7 Ponteland Runners who braved the freezing cold, howling gales and at times knee deep mud for the last harrier league race of the season.  This was the coldest outdoor event I have been to this winter and I think we were all grateful again to Blaydon Harriers for letting us use their tent to shelter from the worst of the wind before the race.  Much talk before we ran was about ‘the hill’ that had to be climbed twice by the ladies and three times by the blokes.  It certainly lived up to its billing and many I saw were reduced to walking stretches of it.  This proved to be the most demanding of the 6 courses we have run this season and once again the standard of the other racers was very high meaning every runner beaten has been hard earned.

Great credit goes to Mark Lyon for again leading the men’s team home in 142nd place out of a field of 354, he continues to run well and can look forward to some good times on the road this coming season.  I followed in 233rd place and close behind was Chris Wright in 250th.  Look out for Chris near/at the top of the club championship scoreboard on this kind of form.  Our Chairman David Buffham was next home in 297th place and kept narrowly ahead of Dave Legg in 310th place.  Completing the team of 6 was hardened cross country runner Peter ‘Bart’ Bartholemew who finished his 5th race this season in 342nd place.

Only one lady from the club raced at Prudhoe but Eva Crowther certainly produced the goods and represented our club fantastically again.  Starting from the medium pack 2 minutes later than most runners Eva finished in 33rd place out of 153, producing the 7th fastest time of the day from the senior women.

Just a quick note to say well done to all runners that played some part in races in our first season as a cross country running club.  In all 10 men and 4 women raced at least once, and while the races are certainly testing I think all have enjoyed the challenge and team spirit that has been on show.  Hopefully many of you will continue running next season and others will be tempted into trying this form of running next season from October onwards.

Discus thrower Nicholas Percy says he is "ecstatic" to be called up for his second World Athletics Championships for the Great Britain team. [...]

Great Britain's Dina Asher-Smith holds on to claim a morale-boosting 200m win in the Diamond League on Thursday. [...]

Great Britain's Dina Asher-Smith wins the women's 200m in a photo finish at the seventh leg of the 2022 Diamond League series in Stockholm. [...]